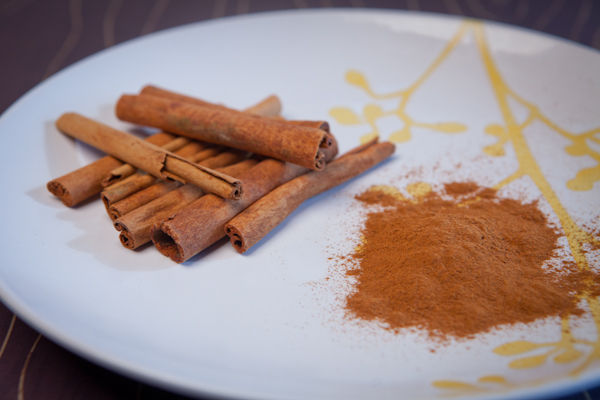 Spice made from the bark of trees in the Lauraceae family. There are several types of trees in this family that yield a cinnamon spice; the most commonly found in supermarkets in the U.S. is Cinnamomum cassia, also known as Chinese cinnamon. There are, however, several cassia types:

Cinnamomum verum or zeylanicum is ”true” cinnamon. Any type that is not verum/zelanocum is a cassia. Although cassia and cinnamon are not the same, they are usually both referred to as “cinnamon” and are somewhat interchangeable. 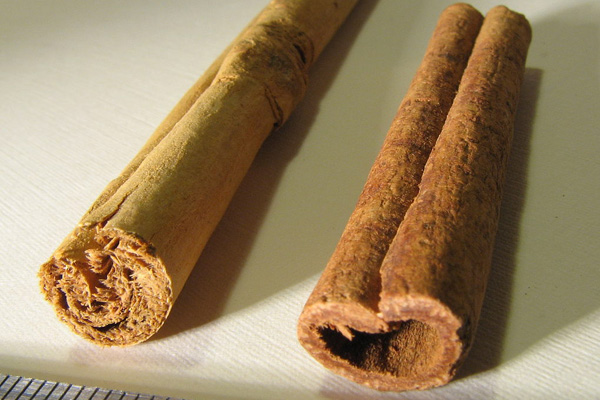 This spice is most commonly sold ground and in stick (or quill) form, but can also be found in chunks. The sticks are actually the inner bark of the tree that has been rolled, pressed and dried. Ceylon cinnamon on the left shows the soft, layered quills. Cassia cinnamon on the right shows the hard, stiff quills.

The spice does contain coumarin, which is toxic in high doses, mostly affecting the liver. Cassia contain up to 5% while Ceylon or “true” cinnamon contains only trace amounts, typically less than 0.5%. Neither is considered a risk when used for typical culinary purposes. Norwegian researchers established a new Tolerable Daily Intake (TDI) for coumarin of 0.07 mg per kg of bodyweight per day.

Read more about safety at DigitalJournal.

Another source states that the European Food Safety Authority (EFSA) established (TDI) of 0.1 mg/kg body weight according to this University of Mississippi study of April 2013.