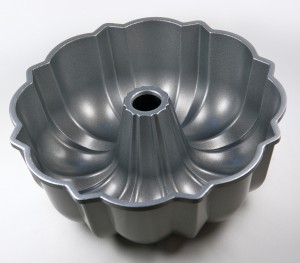 A decorative, ridged ring pan for baking cakes, somewhat similar to a gugelhupf pan. The term Bundt cake refers to any cake that is made in such a pan, but usually connotes a simple snack or tea cake sometimes finished with a glaze. The original ring pans were common in Germany and Austria, the term “bundt” derived from the German “bundkuchen,” literally meaning “gathering cake.” Bundt actually means “gathering of people,” thus it might have been used because the cake batter gathers around the center ring or perhaps because one of these baked beauties assures a gathering of people around the table to eat it! The old-world pans were often ceramic or iron and heavy. In 1950, H. David Dalquist, the founder of Nordicware, trademarked an aluminum design that is still popular today (see image). The design really took off in 1966 when the famous Pillsbury Bake-Off contests’ second-place winner used the pan for her Tunnel of Fudge Cake.

Most recipes using the Bundt pan

call for a 12-cup-size pan. Nonstick versions are great, as you want the cake to unmold with all of the distinct ridges intact and pristine. At the very least, the pan should be well-prepped with butter (and possibly dusted with flour as well). Always follow the recipe’s instructions.