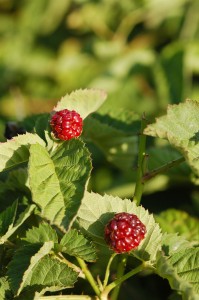 A large, dark purple fruit resembling a blackberry. The boysenberry is more common on the west coast than other areas of the U.S. Juicy berries have an intense flavor that is both sweet and tart.

While some dispute the exact parentage, the berry appears to be a cross between a European Raspberry, the Common Blackberry and Loganberries. The name refers to Rudolph Boysen, who was experimenting with berry crosses in northern California in the 1920s. It took George M. Darrow of the USDA and Walter Knott, a southern CA berry expert, to track down Boysen’s creations, which he had abandoned, having sold his farm. According to Knott’s Berry Farm history, Knott brought the frail vines back to his farm in Buena Park, California, nurtured them back to health and named the fruit after its creator. Knott’s restaurant and farm became known for their boysenberry pies and preserves. Today, an artistic rendering of a pair of boysenberries is featured on the gates to Knott’s Berry Farm as part of their branding.