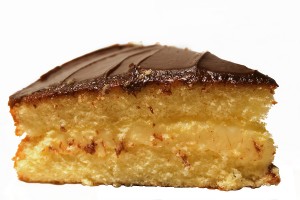 A cake containing two layers of sponge, a vanilla pastry cream or custard in the middle, and a chocolate glaze on top – not a pie at all. The sides are left exposed so that you can see all of the layers. Pie tins were often used to bake cakes in the mid-Nineteenth century, which is where the word “pie” in the name may have come from. The Omni Parker House Hotel in Boston claims to have started serving this famous dessert as early as 1856. In 1996, Boston cream pie was proclaimed the official Massachusetts State Dessert. Beating out Toll-House cookies was an impressive feat.