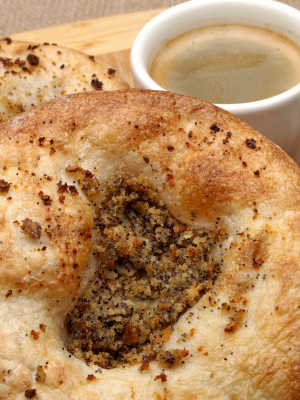 A round, chewy roll-like bread named after Bialystock, Poland. Bialys are similar in looks and size to a bagel but instead of a hole in the middle there is an indentation, which is usually sprinkled with onion before baking. Sometimes the filling will have other ingredients like garlic or poppy seeds. They are less chewy than a bagel (because bialy are not boiled before baking), but a bit more so than an English muffin. Look for them in bagel specialty bakeries (not chains).