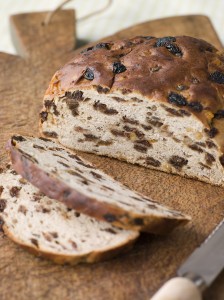 Also barm brack. Traditional Celtic bread rich with sultanas, raisins and/or currants popular around Halloween and the Gaelic festival of Samhain. In earlier days, charms were often wrapped in small pieces of parchment paper and baked inside the barmbrack, each one supposedly foretelling your fortune for the coming year. Typical charms include a ring to denote marriage, a coin to suggest wealth, cloth to signify poverty, a matchstick that apparently means a husband will beat his wife, a thimble for spinsterhood and a button for bachelorhood. The bread can be either a quick bread, based upon baking soda and/or baking powder, or a yeast bread. The liquid called for in the recipe is often strong black tea.

Try soaking the dried fruit in the tea to plump and flavor before incorporating into your recipe.