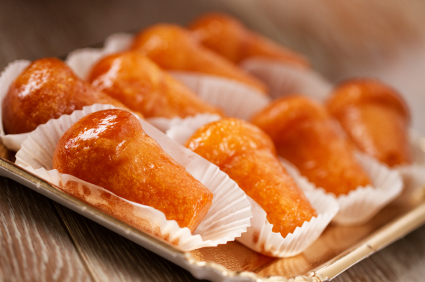 Also called baba. A sweet, yeast-risen cake soaked in rum syrup after baking. It is formed in small, cylindrical baba molds, which are typically metal (or sometimes now found in silicone) and often measure 2 inches x 2 1/8 inches, sides sloping gently outwards. Once baked and unmolded, the pastry’s shape resembles a chef’s toque, a champagne cork, or just a cylindrical plug, depending on how high the dough has risen and whether it creates a “poof” over the top of the mold.

Often served with a dollop of whipped cream, baba au rhum cake is golden in color, spongy, and light yet rich. The experience is as much eating cake as having a shot of alcohol – an adult dessert. Some versions contain raisins. (Savarin is a related dessert using the same dough, but formed in a shallow, smooth-sided ring mold – and never with raisins.) After baking, the babas are soaked in sweetened rum syrup and then brushed with apricot glaze to add sheen, impart a bit of flavor and to help hold in the alcohol. It is typical to see them in pastry shops nestled in fluted paper cups.

Their origin may hail from 17th-century Lorraine, France, where the exiled Polish King Leszcsynski doused his dry kugelhopf with rum. He enjoyed his new recipe so much that he named it after Ali Baba, the fairytale hero. Sometimes the pastries are unadorned; other times they are embellished with bits of candied cherries and/or angelica.