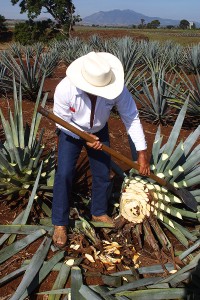 A succulent plant with origins in southwestern U.S., Mexico and Central America that produces a nectar or syrup used as a sweetener. Agave syrup is sweeter than sugar, dissolves easily and, due to its plant origin, is often used as a vegan alternative to honey. There are three different varieties based on color: light, amber and dark. The intensity of flavor is directly related to the color of the syrup, with light being the mildest tasting and dark, the most distinctive. Varieties of agave are also used to make mescal and tequila.