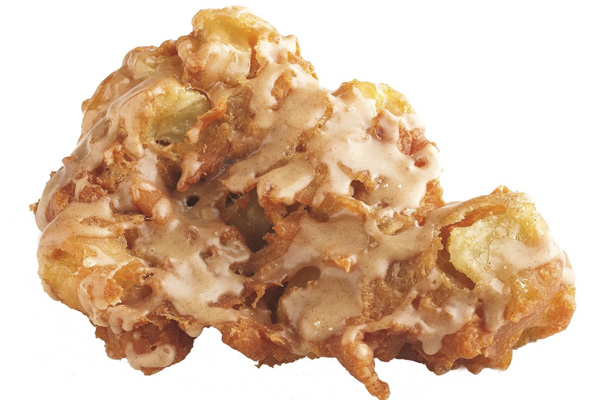 These apple fritters are very rustic-looking, made with whole milk, tart and sweet apples, a bit of cinnamon, and lemon zest. We recommend using one tart apple, such as a Granny Smith and one sweet apple, such as Cortland, McIntosh, Empire, Ida Red, or even Golden Delicious. The fritters must be somewhat flat when they go in the oil—if they are spherical, they will not cook through.

Finish off the apple fritters with a roll in Cinnamon-Sugar Topping or Cider Syrup Glaze (recipes below), or do half a batch in each. Cider syrup, apple cider boiled down to a syrupy consistency, is a specialty product that you might have to mail order (we get ours from King Arthur Flour). The glaze made with this is concentrated with apple flavor and adds something special, but feel free to toss the whole batch in Cinnamon-Sugar, in which case, just double that portion of the recipe.

Adapted Recipe from A Baker’s Field Guide to Doughnuts. © 2013 by Dédé Wilson and used by permission of The Harvard Common Press.